In 1959, Louise, a young white journalist, is looking for a story to tell. She encounters an old black man with an unforgettable story. Eugene Bullard, the first black fighter pilot... who now works as an elevator operator at the Rockefeller Center. No sooner does Louise begin her investigation, than Eugene disappears into the Great South to atone for his sins. He flees in the face of racial hatred but also his own story of heroism. Eugene’s life reads as an epic tale. But a mystery remains at the heart of this story, a moment of treason and loss. With his death imminent, Eugene knows that only the truth can redeem him. And only Louise, catching up with him at last, has unearthed the truth.

Director’s statement
I am passionate about Black music, history, and aviation. The life of Eugene Bullard encompasses my personal interests to such an extent that I’ve sometimes wondered if I dreamed him up! The Black Swallow is drawn in strong, expressionist strokes and a style full of contrast, the better to do justice to the story's richness. It is a fiction inspired by real events. We chose to evoke certain turning points in Bullard’s life where his very existence is in flux, where he finds himself at those crossroads moments of choice that will impact the rest of his life and, often, the lives of others. It is in such choices that we find the measure of a man, and his truth. From these moments we have distilled, through largely fictionalised scenes, that which is at stake in Bullard’s story. Our desire is to tell Bullard’s tale as he would doubtless have wanted it to be told — that of a man who followed his chosen path and who, despite history’s injustices, managed to stay upright and free. 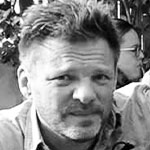 A painter and graphic designer as well as a director, Louis J. Gore creates fiction films, whether live-action, animation, or a mix of the two techniques, yet always with an emphasis on visual creativity and originality of story. Since 1992, he has directed television shows, music videos, and advertisements alongside his own films.

Sébastien Hussenot created La Luna Productions in 1994, and has since then produced more than ninety short films and four feature-length documentaries. He is committed to cultivating long-term working relationships with directors and to discovering new talents the world over.