Paperback VR series plunges you into the world of times long gone... to find new meanings for today‘s rollercoaster life.

Paperback VR is a series of virtual-reality experiences based on some of the most famous works of Lithuanian classical literature. The experiences follow the written stories, adding to them interactivity, intertextuality, and actualizing some of the topics. The viewer becomes one of the characters of the works, immersively participating in the plot and feeling various emotional states of the character. The first in the series is an experience based on Jonas Biliunas' short story The Beacon of Happiness written in 1905, which explores the topic of activism and its consequences.

Director’s statement
Paperback VR is a project that transports five pieces of the most iconic Lithuanian literature into virtual reality. The original aim of this project is to turn public attention to classical literature, which we usually identify as dull, boring and tedious just because teachers at school forced us to study it. Now we are creating the first piece based on the novel Beacon of Happiness written by Jonas Biliūnas in 1905. It is a metaphorical fairy tale about people climbing up a mountain trying to reach a magical beacon, which can make everyone happy. The VR experience puts the viewer into the body of someone climbing towards this magical beacon. All the surroundings, ghouls, sounds and voices are trying to turn him away. And if he does, he is turned into stone and has to start over as another person climbing the mountain. The closer to the magical beacon, the more intense it gets, the atmosphere shifts from a magical fairy tale to a dark psychedelic nightmare. 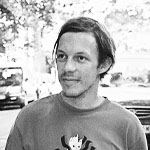 Robertas Nevecka was born in 1984. A self-taught animator, he has worked on a number of local and international animation projects (for brands such as MTV, Warner Music, Lionsgate, Deviantart, etc.). Robertas has a BA degree in film directing. He makes animated films and music videos, illustrates album covers for underground bands and works as an assistant director on film sets. Recently, he finished his debut animated short film Snow Shelter. Currently, he is working on a virtual reality experience. 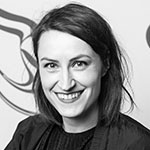 Giedrė Burokaitė (1985) holds a BA degree in Cultural History and Anthropology and a MA degree in Arts management. She has worked in film production since 2012. Giedrė produced a number of short films and the feature-length documentary Animus Animalis (dir. Aistė Žegulytė), which was premiered at DOK Leipzig. Currently, she is working on two short animated films and a VR project.