When a series of statues, the silent witnesses of the former Communist regime, come to life, they tell the moving story of their author.

Zdeněk Němeček is the author of many sport sculptures. Cyclists, swimmers or hockey players - phases of movement frozen in time are dignified depiction of one moment of the human will. With the help of art experiment with the sculptures themselves, this animated documentary examines not only the life and work of the now slowly forgotten artist but also a hard time life in the communist regime. The film examines his story by the interviews with his own family, athletes and theorists of art. Zdeněk Němeček was artist with a global reach, he believed in the time in which he lived and its political regime. Today it is easy to judge him for his convictions, but the film tries to reveal his motivations and map the creative path of an independent artist, which ended prematurely by his suicide at the end of year 1989. A few months after the Velvet Revolution, when the Communist regime, in which he believed, fell.

Director’s statement
Hockey is the sport which is linked with the fate of Czechs and Slovaks like no other. Short film "Desire to Win" was developed as part of my dissertation at AAAD. This process included the creation of two animated documentaries, both related to my first short film "Chase" (2017). As a trilogy, the films focus on the connection between sports, politics, culture, and society. They also echo the glorious days of Czechoslovak hockey, including its achievements and players but also the dark moments. Artistically, this film experiments with Němeček's sculptures using a variety of approaches. These include using 3D scans and printing in combination with classic puppet and 3D animation. Leading the tech side and art production is Ondřej Slavík. Together we digitalized a large part of the sculptor's archive. 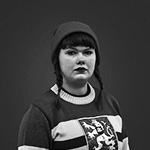 Michaela is working in the area of animation, documentary, illustration and graphic design. She is PhD. student at Prague´s AAAD at Studio of Animation and film. Her artistic research is focused on the animated documentary, especially on the work with oral history. In 2013 she took a part in La Poudrière course of scriptwriting and concept development in France.