The strong and unusual friendship between a young girl and a talking parrot makes them both flourish emotionally and intellectually.

Spot is a young girl emotionally neglected by her hardworking parents. As a substitute for their absence in the young girl’s life, they buy her presents. One day Spot receives a very special present from her parents – a talking parrot. Over time the girl and the parrot develop a strong and genuine friendship. The parrot helps the girl in healing her loneliness, contributing to building up her own self esteem. In return, the girl teaches the parrot about all sorts of useful things about the world by reading to him every day. When Spot senses parrot’s nostalgia and homesickness, she selflessly decides to set him free. The parrot ends up opening a school in the midst of his jungle passing on the knowledge he’d received from Spot to his pupils, small inhabitants of The To-To Jungle. In the meantime, Spot makes a bunch of new friends having her self esteem built up through this mutual bond, and learning that the best smile one can give is the one that comes from the bottom of the heart.

Director’s statement
The story is originally published as a children’s picture book by The Academy of Arts and Culture in Osijek in December 2020, financed by The Students’ Choir of The University of J. J. Strossmayer, Osijek. While translating the picture book into a form of an animated movie the backgrounds would remain static, identical to those in the picture book itself (free brush strokes, soft, pastel-like), whereas the characters would be animated, sharp, more vector-like, and in that way separated from the background. Small background details would be animated as well. E.g., in spread No. 1 the camera zooms in on the main character, we see her waving, smiling, blinking, and in the background clouds are slowly passing by, birds are hopping on the branch, semi-transparent smoke is coming out of a chimney. The number of frames corresponds to number of spreads in the picture book itself (14), the text on each spread would be voiced by a narrator for every frame (music and background noise included). 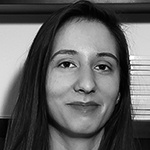 The Academy of Arts and Culture in Osijek