Mamma Squirrel picks nuts for her son’s birthday cake, but he doesn’t know that and eats them all with his friend. Moreover, he lies that it’s the fox who did it.

Two friends – squirrel Tricky and raven Cherry – yield to temptation and eats all the nuts that mamma Squirrel has picked thoroughly to make Tricky’s favourite birthday cake. When the mom sees what has happened, squirrel and raven lie that it’s the fox who took the nuts.  In the evening squirrel’s birthday party is being held, but, obviously, there is no nut cake that was supposed to cheer every forefinger. It’s a delicious tale about the first lessons, two friends and, of course, a cake.

Director’s statement
The “Nut Cake” is an adaptation of a book that I discovered at “Vilnius Book Fair” together with my three-year-old son. It instantly captivated us both with its story and illustrations. As a director, I knew it should become an animated series for kids. Especially, here in Lithuania, where the video content for children is scarce.  For me, it was important to look to the inner world of the character, especially knowing the fact that the series will be watched by young kids, who are experiencing the same situations as the characters of the film. At the age of 3–6 years, children try their first lies – that’s how they get to understand and know the rules of the world, as well as they try to set boundaries and give freedom to their imagination. As the book (and the other two books from the same series) has been successful here in Lithuania as well as translated in other countries I believe this could become a great starting point in creating animated series for kids. 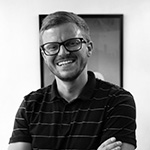 Meinardas Valkevičius has been interested in animation since childhood. In 2010, he graduated from Vilnius Academy of Arts, BA Animation. In 2012, he established the animation studio Meinart. In 9 years, the company has created various animated films, Hunt and Look travelled to various animation festivals and have been selected to many official programmes. Meinart and its director’s vision is to invest part of its profits to create memorable animated films with a deeper meaning. 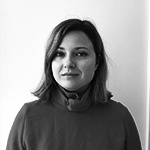 Akvilė Bliujūtė – Janušė is a producer in the animation industry, orientated to children‘s short films. She graduated from Middlesex University and gained her first professional experience within the film industry in Lithuania. In 2017, Akvilė joined Meinart animation studio. Since then, she has produced various projects ranging from commercials to music videos and short films.