Dr. Shari Tremor is finding herself seduced by one of her botanical test subjects, and her 16-year-old, Nadav is secretly writing an explicit gay erotica in his bedroom. Lust can be a funny thing ...

Director’s statement
Orange You Glad is a project of a new kind of genre that I intend to champion. Queer representation in animation–stop motion particularly–is practically non existent. Most queer fiction (live action included) is limited to stories about coming out with male protagonists. With this film, I am pushing to develop a new absurd method of queer storytelling, highlighting the awkwardness of queer puberty and the sexuality of a single queer mother. I aim to showcase human narratives with a strong queer lens. I am also taking the opportunity to experiment storytelling with a triple narrative concept. Nadav’s story, Shari’s story, and that of the protagonist in the erotica are told at the same time. The viewer is taken along an, at times, confusing progression of events that offers elements of surprise and coincidence in an otherwise traditional story. I am excited by the concept of using animation to succeed in communicating otherwise impossible narrative. 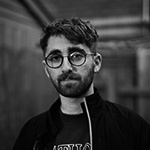