"I was preoccupied with your letters: in agony, in love, in worry, and in an entirely indefinite fear of the indefinite." - Franz Kafka

Franz and Milena – between them a distance, her husband and loads of letters – it is love that fills Kafka's life with light and hope and at the same time illuminates the fears and darkness in him. The animated short Kafka in Love is based on Kafka's Letters to Milena. It explores less known, but nonetheless extraordinary and puzzling aspects of Kafka's personality.

Director’s statement
While reading Franz Kafka’s Letters to Milena, I had an intuitive perception that it could work great as an animated short film, particularly if made in sand animation technique. It was surprising and interesting to discover a part of Kafka’s little known personal life shared in letters at the time with Czech translator and journalist Milena Jesenska – married and living in Vienna. In spite of being rooted in documentary facts about Kafka and Milena, this film is not only about them but also about many of us today as we notice and recognize ourselves in them. This epistolary relationship takes us aback with its complicated, consuming nature, constantly changing emotions, evolving thoughts and shared fears, love, longing and refusal. They meet twice, it is magical and painful at the same time, but how each of them feels about what has just happened, is conflicting. 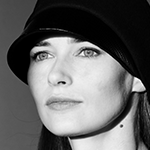 Zane Oborenko is an animated film director and artist from Riga, Latvia. She has completed BA studies at the Academy of Arts of Milan, and MA in animation at the Estonian Academy of Arts. Zane has developed a unique author’s handwriting in sand animation. Her diploma film IMG_00:01. JPG (2013) received the Best Student Film award at the Fredrikstad Animation Festival. Zane has created numerous animations for exhibitions and music events. Currently in production is her sand animation short Kafka in Love.

Sabīne Andersone is the managing director of the animation film studio Atom Art, based in Riga, Latvia and a co-founder and member of the Latvian Animation Association. She has produced prize-winning artistic animation shorts and children films in different formats, and was nominated for the Cartoon Movie Tribute award for Producer of the Year with the feature film Jacob, Mimmi and the Talking Dogs.