During fascist times in Trieste, a young Slovenian girl gets brutally punished at school for being caught speaking in her mother tongue.

Trieste, 1926. Julka is an 8-year-old Slovenian girl. She has two inseparable friends, Danilo and Marko; they talk to each other and at home in their own language: Slovenian. However, since the Fascist regime was established, only the use of the Italian language is allowed. For Julka and her friends, a period of persecution and repression begins. One day, caught speaking in Slovenian by the teacher, she suffers a terrible punishment: she is hung on a hook by the braid.

Director’s statement
In Fascist times, the educational reform (1923) denied Slovenians schooling in their mother tongue. Butterfly on the Hook, based on a novel by Boris Pahor, narrates a violent episode of oppression in an Italian school where the victim is a Slovenian girl being caught speaking in her “awful language”. The story will be developed in an experimental animation technique combining digital and analogue materials mainly using rotoscoping. An unsettled animated trait “torments the surface” and gives shape to dark memories from the Italian past. The classroom becomes a stage to observe the regime’s iconic apparatus. Realistic elements are combined with an iconic structure that conveys the ideology beneath. “Fascism is guilty of having systematically erased the Slovenian language and culture”, Pahor states. This short animated film aims to tackle the issue of the language imposition, not only as repression but also as a form of prosecution: belonging to a language minority becomes a sin. 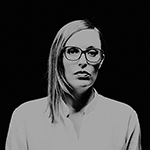 Valeria Cozzarini (1981) holds a BA in Painting from the Academy of Fine Arts in Venice. In 2008, she took part in the European Animation Masterclass at the IAMA in Halle, Germany. In 2009, Cozzarini was selected as one of Fondazione Bevilacqua La Masa artists-in-residence. Her Towel Day – Tribute to Douglas Adams won the Best Art Music Video Award at the Expression Art Movie Film Festival in 2017.

After graduating in Preservation of Cultural Heritage from the University of Udine, he started to develop multimedia design projects, motion graphics and interactive digital animations. In 2002, he co-founded Altreforme, a company that deals with consulting and development of cultural projects and artistic events with museums and art foundations. In 2008, Altreforme started to work in audiovisual production. He works on documentaries, advertising and videoclips as a producer, editor and director.