In the city, surveillance cameras are watching everything. Detecting our every move. A man, Igor is spotted jaywalking at a red light. ALERT! A camera identifies him. The police rush out. Interior bar, Igor orders his first beer. Shortly after, a police squadron pulls up in front of the bar. Igor already drunk; on his 5th round - his face begins to morph into a gorilla's. The police storm the bar. Their face detectors fail to find the target. Gorilla-Igor invites the squad over for a drink. Sour and defeated, the police consider and give in – drowning their sorrows in the bottle. Three hours pass. All merry and drunk, the squadrons faces’ mutate to an elephant, a pig, a bear and a badger. A wild drinking bender montage ensues. Morning, they all awake to discover that they are all trapped in a zoo cage with human faces again. Suddenly, the cage swings open. A zookeeper slides a crate of beer in. From then on, they live to be a constantly wasted pack of animals entertaining the zoo visitors.

Director’s statement
Face Recognition is a satirical look at the technology which dramatically alters our society, making everything private public. The biggest tech companies are now developing their own facial recognition solutions. In a number of Chinese cities, crossing at a red light or taking too much toilet paper in a public WC could lead to a fine being sent straight to your home. Although the idea of the film is critical, it treats the topic in a playful and absurd manner. A social observation of sorts. In the film, people's faces mutate to animals’ when they are drunk. Some to pigs, some to badgers, etc. – depending on their nature.  The forces have to find a solution to avoid becoming the victim of their own weapon. 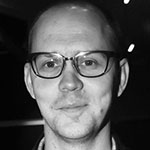 Martinus Klemet is an animation director and illustrator hailing from Estonia. He studied fine arts and animation at the Estonian Academy of Arts. His short films explore humour through depictions of modern society in often unexpected ways. Besides his own short films, he has directed music videos, commercials, infomercials, commission works for museums and other types of animated content. In addition to that,he is mentoring animation students at the Estonian Academy of Arts.