A delusional comedy-drama about the tyranny of fashion and social media.

Deivit, a “normal” young person, depressed and looking for herself, and Lisa, a “modern” influencer and ruthless go-getter, find themselves involved in the sinister plan of Kool Lager, a half-alien fashion mogul, whose objective is to take control of society and convert everyone into slaves of commerce, social media and fashion. Both Deivit and Lisa must face their fears and their personal limitations to find the truth and prevent Kool Lager from establishing a dictatorship.

Director’s statement
"Deivit and Lisa" is characterized by three main features, which make this project unique. First, its style: Mario Tarragó (the creator) invented crazy characters inspired by famous Art and Fashion personalities and placed them in a striking and colorful Barcelona city, by using collage techniques. Second, its plot and structure. The writing team and I planned the narrative development of "Deivit and Lisa" for a full season, in order to present it as an actual comedy-drama story, and not just as a one-off animation episode. And third, the social issues explored in the story, such as the role of fashion and social media within contemporary society. I believe everyone can enjoy "Deivit and Lisa" as there are so many entry points and hooks to amaze the viewers. 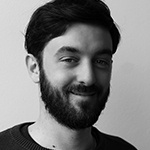 Alessandro is a director and a video-maker. He directs and produces videos and short documentaries for commercial campaigns and sport agencies. In the last few years he has worked as a screenwriter and has become involved in movies and tv projects. 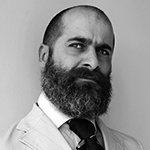 I am the Creator of Deivit and Lisa and Lead artist, and I became a producer out of necessity. Using a crowdfunding platform, I financed the development of both the narrative and the technical development. I then produced the Pilot Episode. Now, with the pilot complete, we are looking for a production company to support our project and help us to sell to platforms and TV channels. We are a small team with a great project, which we’re just starting to show the world.