Dive into a folk fairy tale, set in a universe populated by robots.

The planet of Actinuria, inhabited by the Pallatinids, is ruled by a cruel king, Archithorius. The king, fearing a conspiracy, forces all of his subjects to wear uranium armour. The citizens live a life of loneliness, in constant fear of an explosion caused by a chain reaction. Inventor Pyron decides to solve the citizens’ torment by building a wireless telegraph and giving them a means to connect. Unfortunately, the king uses the new technology to spy on his citizens and puts Pyron in prison. When all hope seems to be lost, Cosmogonic arrives on the planet. Seeing the cruelty of the ruler, he decides to help. He starts by neutralizing the armour and gaining the citizens’ trust. Together, they hatch a plot whereby the citizens pay tax using uranium coins. In the royal treasury, the growing mountain of uranium coins starts a chain reaction, and a spectacular explosion results in the dethroning of the evil ruler. Joy returns to Actinuria, and Pyron becomes its new, righteous ruler.

Director’s statement
First and foremost, this is the story of an oppressed society and its path to liberation. I strongly believe that such a basic drive for freedom is universal. Using a sci-fi perspective, journeying to distant, bizarre and very often incomprehensible places, I want to free the viewer from their domestic, structured vision of the world and turn their face away from the friendly, earthly environment familiar to them. By creating the imaginary world of Actinuria, and by diving into the story of its origin, from the beginnings of life and society to the struggles of a developed civilization, I hope to reach a more neutral perspective, which will help us to look at ourselves. This story is, after all, a fairy tale — one which, in my opinion, specifically explores the driving forces of nature, politics, and technology that shape the world around us.

Paweł Szarzyński is a director, animator and graphic designer, as well as co-creator of the artistic collective kilku.com and co-owner of KINHOUSE STUDIO. He has taught graphics at the Warsaw School of Photography and Graphic Design and served as head of animation and post-production at Saatchi and Saatchi (2016-2017). He has been a freelancer since 2009 in the advertising industry, working with companies such as Prodigious, FCB, National Geographic, and the Discovery Channel. Paweł is a winner of the European Design Awards and the Polish Graphic Design Awards. 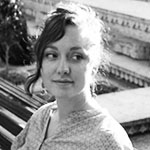 Lauren Dubowski is a writer and producer based in Warsaw, Poland. She recently collaborated with Ado Ato Pictures as co-writer and producer of the award-winning animated VR documentary Another Dream, which premiered at Tribeca Immersive’s Storyscapes in 2019. She also recently translated the web documentary Buried Sun for Biennale Warszawa. Originally from the U.S., Lauren was a Fulbright research fellow in Poland and a Luce Scholar in Indonesia. She holds an MFA from Yale School of Drama.

Marta Szarzyńska is CEO and producer at Kinhouse Studio. She has worked in advertising and collaborated on theatrical productions. Currently, she is Vice President of the Section for Young Producers at the Polish Producers Alliance. She recently produced The Nixie (2018) by Julia and Mai Bui-Ngoc (Awards: European Cinematography Awards [ECA] Best Director winner, Miami Independent Film Festival Short Narrative & Docs winner).