In the far future Alex rebels against the system led by Artificial Intelligence in a quest to find his virtual woman Sophia in reality, among the deleted humans in the underground caves.

Deleted is a hybrid, 3d animation/live action, dystopian movie, set in the caves of the far future. Planet is polluted and humans live underground, under the command of centralized AI. Alex and Sophia are in love, expecting to make it official, but Sophia is not selected by AI for further reproduction. Alex sacrifices his virtual life to go after her. In the underworld, where cleaners turn deleted people into the ashes, he survives by joining a rebel group. But he leaves them in order to finally find Sophia among believers, who claim that God, and not Artificial Intelligence made human kind. But their happiness doesn't last long. Ultimately two of them are forced into coming out to the surface of the world, where, alone in the radioactive, but magnificent nature they discover their own world.

Director’s statement
I want to send a message from the distant future to the audience. To show how the world we live looks from that perspective. Will our advance result in the loss of the highest human value, the freedom!? And could we avoid it? The question of whether there is a way out for all of them living in futuristic caves is a metaphysical one and brings us back into the present, where the answer lies. For them, our present is virtual reality, and that is why a part of the film is live-action, with overacting action. While their reality appears like actual video games, with realistic 3D characters. Even though the action takes place in the future, our present life is the main topic and I want to tell the story about the very actual subject of erasing the borders between real and virtual, digital life, and its consequences and solutions. And the focus is on the love story, between two suffering individuals, our descendants. The story of love and freedom. Now and then. 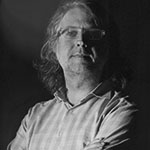 Zoran Krstic is director, visual effects supervisor, producer and partner in Open Studio Belgrade. In the fields of visual effects and animation he has more than 20 years’ experience. Graduated at Dunav Film School in the class of professor Purisa Djordjevic. In the meantime he directed TV commercial campaigns, and TV shows at national TV. Today he is a renowned international director of animation/VFX commercials and VR/360 content. 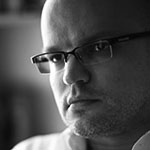 Aleksandar (1978) is a Sound Artist and Producer from Serbia. He and his company are the leaders in SE Europe in the field of sound post-production, working on more than 60 feature films, 30 TV shows and 4000 commercials. He has collaborated on projects with major film directors and producers including Marina Abramovic, Luc Besson, Emir Kusturica, etc. He is now pivoting towards all kinds of creative processes, including development and production of feature films, TV series and animation.