Each year, several dozen film festivals take place in Poland, most of which screen animations from Poland and abroad. Among the festivals devoted to animation, or those where animation constitutes a major part, a few are worth mentioning: 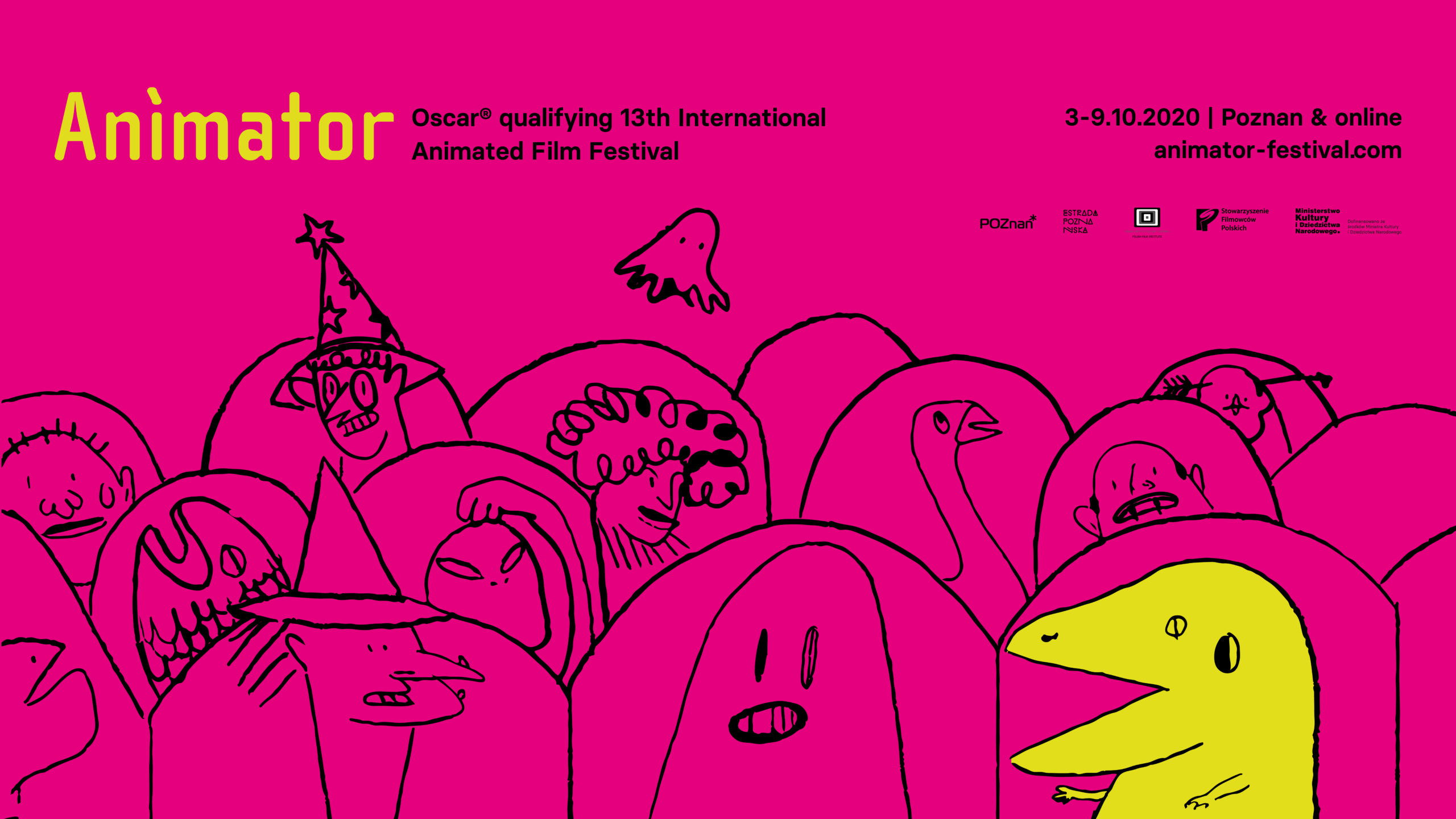 The largest Polish festival dedicated to animation. It was established in 2008 and since then, it has strengthened its position on the map of Polish and international festivals. The breakthrough came in 2017, as from then the winners of the Grand Prix – the Golden Pegasus – may qualify for the Oscar nominations in the Best Animated Short Film category.

Over 300 productions from around the world are screened during the festival. The presentations outside the competition include retrospectives, reviews and premieres. The International Animated Film Competition is one of the most important events of the festival and an opportunity to see the latest feature films and shorts.

ANIMATOR also creates a platform for meetings with creators, attending exhibitions and lectures; a special programme, Animator for Children, is held during the festival as well as Animator PRO dedicated for the film industry.

ANIMATOR takes an important position on the map of the most important animated film festivals in the world. The editors of a book devoted to festivals titled Coming Soon to a Festival Near You: Programming Film Festivals, published by the prestigious publishing house of St. Andrews University, recognized ANIMATOR as one of two (next to the one held in Hiroshima) animated film festivals worth presenting separately.

The Krakow Film Festival is one the oldest events in the world dedicated to documentary, animated and short film forms. The origins of the festival date back to 1961 when it was established as the National Festival of Short Films. After three years, it was transformed into an international event. Its current name was given in 2001. Since then, the festival has been held on a fixed date at the end of May and beginning of June.

During the eight festival days, the audience have the opportunity to watch about 250 films from Poland and from all over the world. They are presented in the competition sections and in special screenings. The festival is accompanied by exhibitions, concerts, open-air shows and meetings with creators. Every year, the festival is visited by approximately 900 Polish and international guests: directors, producers and festival programmers.

The Krakow Film Festival is one of the festivals accredited, among others, by the International Federation of Film Producers (FIAPF), the European Film Academy (EFA) and The Academy of Motion Picture Arts and Sciences (AMPAS), thanks to which it is the only one in Poland to be included in a very prestigious group of festivals qualifying for an Oscar in the full-length documentary category and as one of two Polish festivals in the short film category. The Krakow Film Festival is also in the group of the renowned festivals recommending short films and full-length documentaries for the European Film Award.

During the festival there are also concerts, exhibitions, numerous debates and meetings held with authors and representatives of partner film festivals (e.g. From Leeds, Jihlava, Uppsala, Guanghzou, Tampere, Stuttgart, Leipzig, Kiev and Berlin).

Since 2006 the professional industry section has been organised as well – The Krakow Film Fair.

International Film Festival Etiuda&Anima is the oldest film festival in Poland that confronts the achievements of film and art school students from around the world with the achievements of artistic animation creators – both professionals, students and independent producers. The central, annual events at the festival are two title competitions, under which the following awards are granted: in the student competition covering feature and documentary etudes – Golden, Silver and Bronze Dinosaurs and a Special Golden Dinosaur for the best film school of the festival, and in the competition of animation authors – Golden, Silver and Bronze Jabberwocky and, additionally, a Special Golden Jabberwocky for the best animated student etude of the festival. Every year, a Special Golden Dinosaur award is also presented to an outstanding educator who is at the same time an active and artistically successful artist. In 2017, the festival program was expanded to include the anima.pl competition, which is devoted to Polish animation.  The awards granted during the competition are called Vipers.

For many years, after the festival finishes, the films which have been awarded in Poland and abroad are screened as part of the Touring Etiuda&Anima (Objazdowa Etiuda & Anima) event.

From the beginning of the festival, the main items of the event are surrounded by a rich programme of accompanying events. During the latest editions, they are primarily an opportunity to meet world-class animation artists and the most interesting phenomena in this field of creativity. As part of non-competitive events, viewers can also recall interesting film phenomena from the past of cinema, especially animation and documentary, as well as get acquainted with contemporary short and feature-length animated films that do not reach cinema screens and are rarely available at festivals in Poland.

The constantly evolving Etiuda & Anima International Film Festival has recently been opening up to new media and other artistic areas. At the same time, the festival extends its field of influence through program exchange with other – especially foreign – film events and presentations in many countries around the globe.

StopTrik IFF is a unique international celebration of worldwide stop motion animation. In a period of one month Slovenian city Maribor and Lodz in Poland become alternative capitals of animation thanks to the festival of highest quality film programme, spectacular additional events and inventive professional workshops of stop motion technique and festival journalism. In between following editions of the festival, StopTrik IFF tours around the world with special screenings, workshops, lectures, seminars and other activities that stimulate understanding and development of artistic animation.

StopTrik IFF was born in Maribor and throughout the years it has became a recognized and appreciated event on the international scene of artistic animation. The mission of the Festival is to draw attention of various Audiences to the splendour of stop motion traditions and practical aspects of animation filmmaking as well as to the value of cultural activism through festival discussions, interventions and interactions, film education and academic reflection. International dimension of the festival becomes clearly visible through artistic programme (each year StopTrik IFF competitions and retrospectives expose outstanding stop motion achievements from all around the world) as well as strong regional, European and intercontinental networking with various cultural institutions, partner and friendly animation festivals, and creative cooperation with festival co-organizers in Poland.

Since 2011 the Festival grew to 4-days event that embraces:

It is one of the most important Polish festivals. It has been present on the cultural scene since 1985; whereas since 2009, it has been included in the ranks of events awarded by the International Federation of Film Producers Associations (www.fiapf.org) as international competition film festivals – next to festivals such as Cannes, Venice, Berlin, Locarno, San Sebastian, Karlovy Vary, Tokyo, Moscow, Mar del Plata, Montreal, Shanghai, Cairo, Goa and Tallinn.

As part of the festival, films from all over the world are screened, both full- and short-length features. The festival welcomed world-famous directors as guests, such as Michael Haneke, Cristian Mungiu, Paweł Pawlikowski, Ari Folman, Ashgar Farhadi and Lenny Abrahamson.

The Warsaw Film Festival, apart from the events available to all festival viewers, has also held a section dedicated to film industry professionals for over 15 years. The CineEast Fair has been active since 2005, and the Warsaw Industry Days since 2017, as part of cooperation with the Polish Film Institute. Together with FIPRESCI, workshops for young journalists and film critics are organised.

Established in 2019, the festival is dedicated exclusively to animation. It was founded by the director and animator Tessa Moult-Milewska and Ewelina Leszczyńska, a program specialist at the Polish Film Institute, who co-organised the Warsaw Film Festival in the past.

Short films compete for awards in two categories: Professional and Young Animation. Both Polish and international productions are presented during the festival.

The event is co-organized by Platige Image studio, known for its productions, such as Another Day of Life about the life of Ryszard Kapuściński, or cooperation on the film adaptation of the Witcher saga for Netflix. During the festival, the studio is also responsible for the workshop part.

The second edition of the festival was held online.

The article has been prepared with the use of materials available on the organisers’ websites.